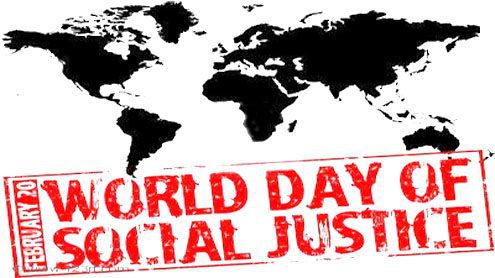 February 20th marks the World Day of Social Justice established by the United Nations (UN), and this year’s theme recognises environmentally sustainable economies and societies. The World Day of Social Justice brings together the fundamental values that all societies should have: equality, harmony, solidarity and social justice. The United Nations holds social justice at the core of its mission to promote development and human dignity.

Governments have made a commitment to the creation of a framework for action that promotes social justice not only a national level, but internationally. In addition, Governments around the world have also pledged to promote equal distributions of income and resources and have recognised that a society for all needs to be based on respect for all human rights.

The World Day of Social Justice places an emphasis on civic duty, engagement and solidarity which is a new politics that will bring a society defined by utilitarianism. That which is fair, moral and just is that which a civilization must decide in order to assure social justice. A day in which the General Assembly will recognise that social development and social justice are indispensable for the achievement and maintenance of peace and security amongst nations. Social development and social justice cannot be attained in the absence of peace and security, or in the absence of freedom.

Oxfam reported that 80% of the world’s richest people had the same amount of wealth as the poorest 3.6 billion people. The effects of economic inequality can have drastic results, even in the UK there is a growing divide between the life expectancy of the richest and poorest within society.

In 2008, the Declaration on Social Justice for a Fair Globalization was adopted by the International Labour Organization (ILO) in an effort to show its commitment to social justice. The Declaration posits that achieving improved and fair outcomes are necessary for the aspirations of a just society.

“In this crucial year for global development, as Member States work to craft a post-2015 agenda and a new set of sustainable development goals, let us do our utmost to eradicate all forms of human exploitation. Let us strive to build a world of social justice where all people can live and work in freedom, dignity and equality.”  Secretary-General Ban Ki-moon

Whilst globalization and interdependence are opening opportunities through trade, investment and capital flows which encourage the improvement of living standards around the world, there are still severe challenges such as insecurity, poverty and inequality amongst societies which places barriers to further integration and participation in the global economy.

In June 2014 the International Labour Conference voted overwhelmingly to adopt a Protocol and a Recommendation that provided specific guidance on effective measures to be taken that would help eliminate forms of forced labour. In 2015, the International Labour Organization held a panel discussion on modern forms of forced labour and human trafficking and the impact this had on national and global social and economic development.

In order to advance social justice, societal barriers must be removed. These include gender, age, race, religion, culture and disability. The 2015 theme for the World Day of Social Justice was ending human trafficking and forced labour. Forced labour takes different forms including trafficking and debt bondage. Victims of this are usually women, migrants or sweatshop workers.

Whilst unemployment has been falling in developed countries, the job crisis is not likely to end in the short term, especially in emerging countries. Unemployment rates are expected to rise by 2.3 million, reaching 199.4 million in 2016 with an additional 1.1 million forecasted to be added to the global tally by 2017.  This means that both males and females are likely to have to accept lower paid jobs, both in emerging and developing economies.

Urgent action should be taken to increase the number of work opportunities in order to alleviate tensions. Policies need to focus more on strengthening employment and tackling the inequalities. Furthermore, vulnerable employment is concerning high in developing economics with peaks in Southern Asia and sub-Saharan Africa.

Keep up to date with the World Day of Social Justice on Facebook and Twitter using the hashtag #WDSJ2016! Additionally, there are many resources online for teachers including lesson plans about social justice too!