byTiffany Thompson
in Mental Health, Sports
0
ADVERTISEMENT
Share on FacebookShare on TwitterShare on LinkedinShare on PinterestShare via EmailShare on Reddit 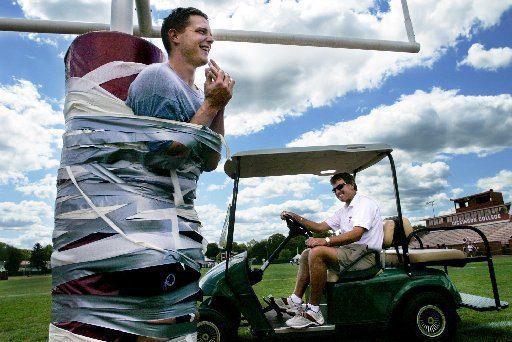 Hazing incidents among high school athletes have been increasingly common in recent years. Unfortunately, students and the broader community sometimes view hazing rituals as part of a tradition or naive school pranks. However, these dangerous behaviors can lead to serious injuries, and in some cases, death. Hank Nuwer details some of the earliest accounts of a hazing deaths in the United States which includes Edward Turnbach who became a victim on September 19, 1885 at A Hazelton, a high school in Pennsylvania.

There he found a 15-year-old freshman player covered in blood, urine and feces, Hamilton County District Attorney General Neal Pinkston told ESPN. Two sophomore players were holding the boy down, while a third teammate, a senior, shoved a pool cue up his rectum. The freshman was rushed to the hospital for emergency surgery to repair his bladder and colon, which had been ruptured by the cue. The three alleged assailants were arrested and charged with aggravated rape. Read More

In light of current trends, professionals, survivors, students and athletic officials recognize the urgency of this social justice issue. Let’s look at how is hazing defined.

Michelle Chaney, M.D., MScPH from The Clay Center for Young Healthy Minds at the Massachusetts General Hospital, defines hazing as “any activity expected of someone joining or participating in a group that humiliates, degrades, abuses, or endangers them, regardless of a person’s willingness to participate.” In an article for the

These numbers highlight the frequency and range of severity of hazing incidents among high school students. They also give insight into the hazing culture. It also explains that some students are hesitant to speak up because they feel powerless or they lack confidence in the adults around them.

Many factors contribute to the cultural climate of hazing such as a belief that hazing practices are normal, incident under reporting, victim blaming and perpetrators sometimes receive modest sentences or no penalties whatsoever. According to the article “Bullying and Hazing in Youth Sports”, the author states that hazing is frequently exculpated as, “kids being kids”. Given that hazing rituals have existed since the 1600s, Psychologist Susan Lipkins argues that a substantial change in the world view of hazing would need to occur in order to increase personal and organizational accountability. Lipkins is the author of the book“Preventing Hazing,” which is a great comprehensive resource for anyone impacted by or concerned about this issue.

As a community, there are numerous ways to address hazing among high school students and athletes. The following are suggestions for national, state and local level involvement.

For prevention strategies to work, the National Federation of State High School Associations has:

What can sports programs do?

Sports programs can develop team building activities to foster unity in addition to mentoring programs with upperclassmen, who assist their younger peers to reduce hazing incidents.

Michelle Chaney emphasizes that parents can help by:

Another opportunity to stay proactive is to participate in social justice activities. April is Sexual Assault Awareness Month (SAAM)  and in September is National Hazing Prevention Week, which is launched by HazingPrevention.org. Community involvement in anti-hazing activities increases awareness and continues the conversation throughout the year.

Three main findings were presented by the court. First, the court established that the alleged actions were interpreted “as a sexual act that is a severe violation of an individual’s body and personal privacy.” Second, the court decided satisfactory proof had been presented to infer that school personnel were aware of the alleged activities.  Lastly, the court discovered adequate indication of conscious apathy by school officials involving a breach of procedure. Dr. Edward F. Dragan adds that if a Title IX allegation is submitted involving hazing and sexual harassment, litigant and offender representatives must investigate the nature of the behavior, how many participated and the level of mental trauma endured. Also, Dragan shares that a determination must be made as to whether or not school officials followed protocol in the case. Title IX has an important task in the legal aspects of hazing situations.

By recognizing the long-standing tradition of hazing in our high school programs and implementing prevention policies across the board, we can eliminate future cases. Through increasing awareness and community outreach, we can empower survivors and teach youth the positive aspects of extra-curricular activities (i.e. fun, friendship and critical thinking skills). Acknowledging the problem, supporting youth and their families and encouraging accountability can transform hazing ethos and promote healing.