bySWHELPER
in Human Rights, News
0
ADVERTISEMENT
Share on FacebookShare on TwitterShare on LinkedinShare on PinterestShare via EmailShare on Reddit 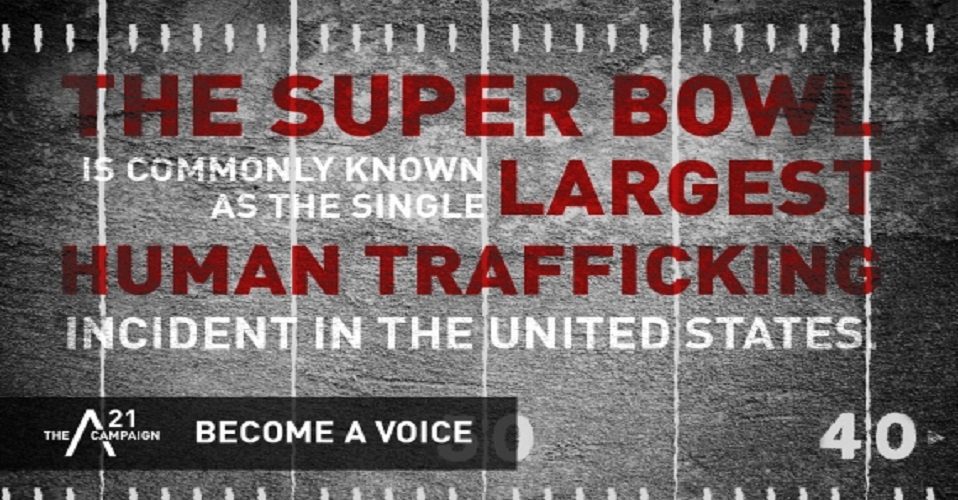 WACO, Texas – Super Bowl festivities in Houston will be in full swing this week as the nation gears up for the NFL’s premier event on Sunday. Thousands of people will pour into the city. Unfortunately, those crowds will include those involved in human trafficking.

“We can expect to see an influx of out-of-town victims and trafficking solicitations during Super Bowl weekend. Much of that will take place online,” said human trafficking expert Elizabeth Goatley, Ph.D., assistant professor in Baylor University’s Diana R. Garland School of Social Work.

Goatley said large-scale national events like the Super Bowl draw attention to human trafficking, and it’s an appropriate time to make people aware of the epidemic, which victimizes hundreds of thousands of people within the United States each year. Globally, an estimated 20.9 million people are victims of human trafficking, resulting in a $150 billion industry, according to the International Labour Organization.

“Communities can make a difference in combating human trafficking,” Goatley said, “but it takes knowing your neighbor and your neighborhood and doing for the ‘least of these.’”

1. People must understand that human trafficking includes both sex and labor trafficking.

Human trafficking is the bartering or transactional engagement of a person for sex or labor, through the use of force, fraud or coercion, Goatley explained. Most communities and congregations focus on the “commercialized sex” part of human trafficking and often neglect those who are trapped in labor trafficking.

2. Human trafficking is cultural and contextualized to specific environments.

“When people say, ‘Tell me what human trafficking looks like,’ my response is always to reflect on how those in poverty are surviving in that community,” Goatley said.

In urban areas, she explained, it may look like the commercial sex industry (strip clubs, online ads, local prostitution tracks or brothels) or like day laborers who are financially exploited. It may look like childcare workers who never get days off, no breaks and little pay for labor; or it may look like a teenage runaway who needs food and barters sex for a meal or place to stay and is not allowed to leave.

In rural communities, she said, human trafficking may look like agricultural workers who are refused breaks and payment, or those working in toxic conditions and sweatshops. It may look like a family member bartering sex with a child to pay a bill.

“To best address human trafficking, people must know what’s going on in their communities,” she said.

3. Human trafficking is no respecter of race, gender, class or religion.

“There is no ‘type’ of person that can be lured into human trafficking,” Goatley said.

In a recent column Goatley penned for Ethics Daily, she provided the following examples of those who’ve fallen victim to human trafficking.

“Through my work in trafficking, I’ve heard stories from the 15-year-old competitive swimmer from the elite swimming club who fell for a guy she met on the Internet. When he asked for a meeting at the local mall to “hang out,” she didn’t hesitate. She told her mother that she was meeting friends at the mall, left home and didn’t return,” Goatley wrote.

“I’ve listened to a mother describe the struggle of providing for her family in her native country and the decision she made to sacrifice everything for a chance at a better life in America. She paid a coyote (smuggler) to help her cross into the United States, but upon crossing the coyote refused to let her go without a $10,000 ransom. She was forced to have sex with strangers until her debt was paid,” she wrote.

“I will never forget the story of the migrant worker who ‘followed the crops’ to provide for his family. He worked long hard hours in the fields picking a plethora of fruits and vegetables, pulling tobacco and tending to stables where he wasn’t allowed breaks and paid a dollar and a half a day,” Goatley wrote.

Fortunately, she wrote, all of those stories are of survivors who were assisted by local churches and other human trafficking organizations.

“Get to know the needs within your community,” Goatley said.

Is there a local school that needs adopting? Goatley said that research shows that third- and fourth-grade literacy rates have great predicting values on the path of a child’s life.

Is your church located in an immigrant community? Consider offering English as a Second Language courses (ESL), Goatley said. Research shows that immigrants that have better understanding of the English language are less likely to be exploited in the hiring process.

Is your church located within a community that experiences homelessness? Consider adopting a homeless shelter, Goatley said. Research states that runaways, throwaways (children whose families have put them out) and newly homeless persons are at a higher risk for human trafficking within the first 48 hours on the street.