Rescue to Recovery Stages in a Red Cross Disaster Deployment

byKristie Holmes
in Emergency Management, Mental Health
0
ADVERTISEMENT
Share on FacebookShare on TwitterShare on LinkedinShare on PinterestShare via EmailShare on Reddit 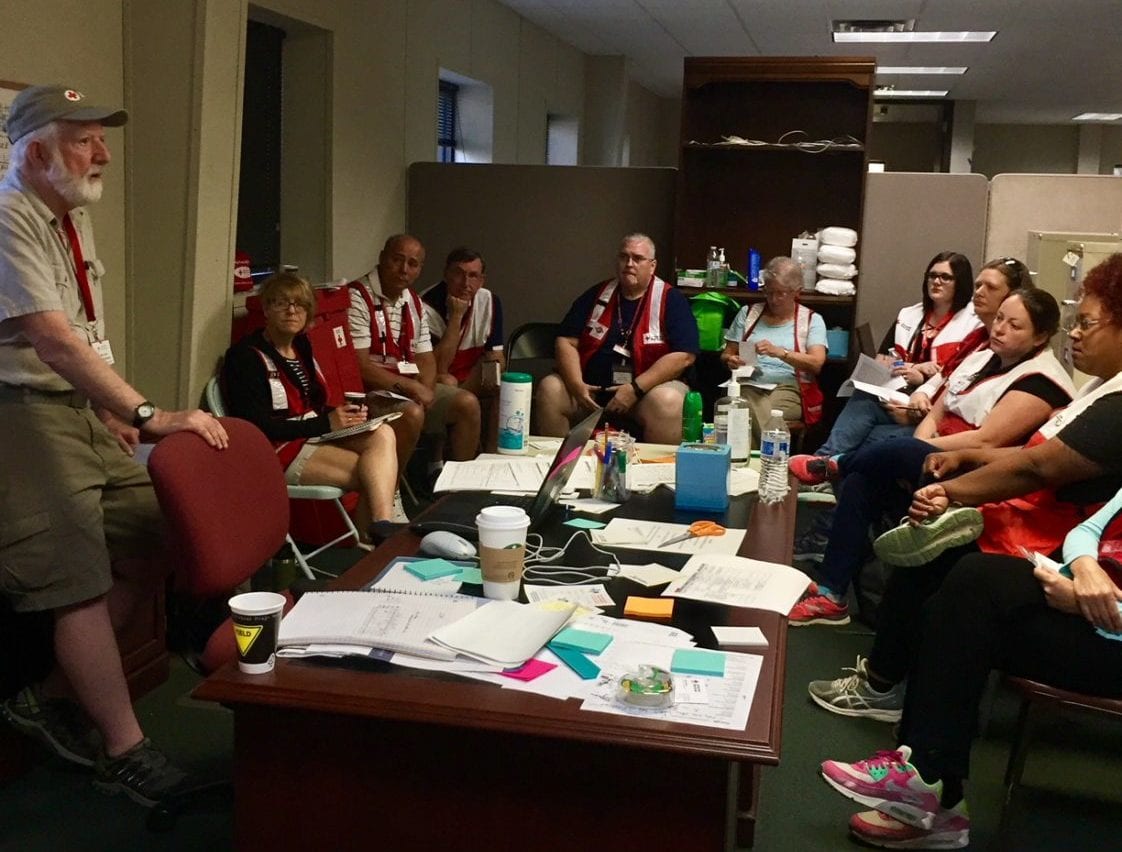 Roy was my partner for most of our deployment with Red Cross on the Disaster Mental Health Team in Texas. We spent many hours on the road mostly on our own, with the exception of “ride to the office” or “back to the shelter” caravans, which could be quite crowded as there were few available cars to ferry us all from the staff shelter to Headquarters for the day.

Conversations stayed rooted mostly in the present, even with kids occasionally Face-timing us in the car when a signal would pop up. I know that he’s been a social worker since 1970 and that he has been married nearly as long. Getting to know each other on a disaster mental health deployment is a different way of knowing someone, but knowing them well regardless. Similar relationships are built with the people you sleep a couple of feet from in the staff shelter.

Roy: “Wasn’t there a band people used to like called the Dead Heads? People liked them but I think they’re dead.”

Roy, In response to a question about breakfast: “Right I’ll give you another rotten orange in the morning.”

Kristie: “No thank you; that coffee was sufficient.”

“Roy, just go ahead and get in the wrong lane again for this right turn.” (Texas “turnarounds” can be a nightmare).

There was the normalcy of the city center recovering, demonstrated through open shops and Home Depot’s parking lot was nearly at capacity. Starbucks opened, there was a carafe in HQ for one of the lucky teams.

Vulnerability and exploitation were visible not far from the city center. Compounding issues plague those who struggled prior to the disaster. Living paycheck to paycheck when there is suddenly no paycheck creates a domino effect of financial disaster. You can only call the companies to beg for mercy if your phone works, if there are enough bars available to connect you. The smell is rising in neighborhoods, and the question, “What is that smell?” was more frequent today. Mold grows rapidly, and you can smell it from the street.  Weeks have passed since the initial disaster, but it is just beginning to unfold for many people do not have flood insurance.

I ended up making a call to the Attorney General’s office regarding landlords who are refusing to remediate damage and demanding rent from those who cannot pay (or live in their home), with the threat of their things being sent to the dumpster. The police were empathetic but said that it’s a civil issue and in a disaster needs to go to the AGs office. So the wet carpet stays with children living inside, and they lack healthy food- maintaining on what looks like a vending machine diet.

There are contractor company scams that further exploit the exploited, and many workers are being brought in from surrounding areas without protective gear (notable lack of face masks) and clearly without reasonable hours or meal contracts.

On the other end of helplessness and anger, I felt in awe of all of the volunteers and what they do. They respond at the crack of dawn to Headquarters to work with a team using colored post it’s on the wall to map progress and hot spots for the day. Knowing that it’s likely that at the end of the day, they will have gotten sidetracked from the need that was directly in front of them, feeling regret for not making it back to the places they know are in desperate need but are now blocked by factors beyond their control.

Headquarters experienced an evacuation- someone screamed, “Get out! Get out of the building!” It turned out to be some off-gassing cones, but everyone went right back to work outside while standing outside the building waiting for clearance entirely unfazed.

Volunteers will talk it out with each other back at the shelter late at night, eating cold leftovers from the ERV (feeding) vehicles. Informal meetings run from their cots which will make a difference the next day in how resources are allocated because drivers are sleeping next to mental health, nurses, and those doing communications assessments. If you end up both eating and securing a space in line at the shower trailer behind the civic center before it’s too late, it’s something of a miracle. With a lot of contamination and illness going around, it’s best to just throw away the shoes on your way out.

As for the people we served, we realized the depth of desperation that is held for those in areas without good water. Your clothes were washed away or were contaminated, and even if you could wash them, you can’t because your washer and dryer is flooded (one family had some kind of snakes in theirs) as is the laundry mat down the road.

We brought restaurant workers wearing their last items of clothing and shoes serving people in the only community restaurant to open back up in Port Arthur in a certain radius, knowing that those clothes too, would soon be dirty. So what then? How long will this all take? While you may see signs of recovery in the city center, it’s clear that this is going to take so much longer for others, and the rural areas are barely touched by “helpers”.

The depth of this disaster isn’t something that we are used to covering, Katrina taught us a few things that are applicable, but each disaster is its own, and this scale is unimaginable. Puerto Rico is now unfolding as we watch on our screens, in some sort of mass denial of scale.

Most of us can sit comfortably behind our devices and all caps “GET TRUCK DRIVERS!” and while I can personally imagine the barriers that they have in distribution as we just experienced them in Harvey, you just can’t know unless you’re there and are using all of your five senses.