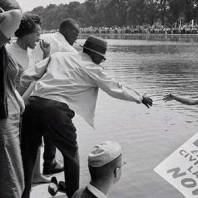 A series of events commenced on August 24, 2013, to commemorate and honor the 1963 March on Washington, and Dr. Martin Luther King, Jr.’s historic “I have a Dream” speech. The National Action Network (NAN) led by Reverend Al Sharpton hosted the first celebratory March on Washington event this past Saturday, and the last event honoring the historic gathering ended on August 28th with a speech by President Barack Obama.

As an observer of this moment in our history, I must admit it was a lot to take in. There was a long list of speakers including Ben Jealous, President of the NAACP;  Congressman John Lewis, the only living speaker from the 1963 March; Reverend Jesse Jackson, Attorney General Eric Holding, and Nancy Pelosi to name a few.

There was also a host of leaders from civil rights organizations and labor unions who gave speeches at Saturday’s event as well. As we reflected on the organizers and the intent of the 1963 March on Washington, a recurring thread that I heard was whether “The Dream” had been realized.

For me, Reverend Al Sharpton gave the best speech of the day. It was a speech that not only explained the essence of the day, but it helped to relay the barriers and challenges moving forward for the future. As an African-American woman, I believe my generation has been named beneficiaries by those who gave their lives during the Civil Rights Movement.

As a result of the movement, legislation was passed and governmental programs implemented which helped to narrow the gap between black and white America. The African-American community experienced a season of prosperity to the point where many of the most gifted and well-off African-Americans feel civil rights protections are no longer needed. In this regard, Dr. King’s dream did come true.

However, when those who opposed racial equality realized these interventions were working, they adapted and set in motion new policies to lessen the effectiveness of civil rights legislation. These new policies are Right to Work legislation, Stand Your Ground Laws, outsourcing, voting map redistricting, defunding social welfare programs, and voter restriction laws. Dr. Martin Luther King’s dream of the removal of black Americans’ fear of death for speaking their political beliefs and advocating for their communities has been realized.

We must adapt and renew a dream for the advancement of vulnerable populations and minorities. The Civil Rights Movement broke open opportunities previously denied to African-Americans such as the right to vote, equal housing, education, and equal access to the same resources as white Americans.

The second leg of the Civil Rights movement should not be focused only on what the government needs to do rather than focusing on advancing unification through mentorship and reinvestment within our communities.

Currently, it’s not the government that divides us, but it’s our treatment of each other. Our government is only taking advantage of the division.