byMeredith McMonigle
in Criminal Justice, News, Politics
0
ADVERTISEMENT
Share on FacebookShare on TwitterShare on LinkedinShare on PinterestShare via EmailShare on Reddit 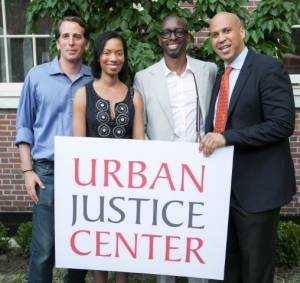 In August 2013, Cory Booker, candidate for the United States Senate from New Jersey and the presumptive winner in a state that has not elected a Republican to the Senate in decades, made the bold announcement to run on a criminal justice reform platform. In an obvious signal that he is spending his considerable political capital on what up to now has been a losing issue, Booker released a 16-page document outlining his plan which is a laundry list of policy recommendations hitting on every phase of the justice continuum.

As mayor of Newark, he made reforming the justice system a priority by creating the Office of Reentry at City Hall which is one of a few in the country. Partnering with the conservative Manhattan Institute, the program works with hundreds of returning inmates each year to find employment. Community partnerships allow the office to offer the wrap around services needed for successful reentry such as housing and legal services to circumvent  the collateral consequences of having a criminal record.

Booker pulls no stops in the report, and he sounds off on all the familiar complaints on both the left and the right about our broken system. On efficiency he states:

“We waste massive amounts of money on strategies that make our communities less, not more, safe. “ On the impact of mass incarceration on families and communities—“Not only do they lose their incarcerated parent’s income and other direct support, but innocent children who have one or both of their parents in prison also suffer trauma, social stigma, and destruction of their familial relationships.” And on racial disparities—“Today, 1 in every 15 black males is in prison or jail, compared to 1 in 106 white males.”

Under six broad categories including modernizing incarceration and investing in re-reentry, Booker offers the kinds of solutions we at SCSJ have been advocating for years. Through our work on the Ban the Box campaign in Durham, we have reduced the collateral consequences Booker highlights in his report. Applicants for county jobs in Durham will no longer confront the criminal records question at the front end of the application process. In our effort to document racial disparities locally and across the state of North Carolina, we have helped to increase the public’s understanding of the fundamental issues of fairness and justice in the system.

To anyone that cares about the fact that we as a nation house 25% of the world’s prisoners, this is exciting news. Booker brings the kind of star power and charisma not seen in politics since another African American burst onto the scene with a run for the Senate from Illinois. But the real question is, can Booker deliver? Jim Webb left the Senate recently, failing to find traction for a similar reform effort. All he was asking for was a Commission to study the issue.

Of the Republicans that blocked the bill by a 57-43 vote, Webb said:

“Their inflammatory arguments defy reasonable explanation and were contradicted by the plain language of our legislation. To suggest, for example, that the non-binding recommendations of a bipartisan commission threaten the Constitution is absurd.”

However on rare occasions, winds can change directions quickly in Washington, D.C.  Booker entered the Senate race on the heels of Attorney General Holder’s speech calling for reform of drug sentencing laws. “It’s clear,” Holder said, “that too many Americans go to too many prisons for far too long, and for no truly good law enforcement reason. The speech was roundly praised with little blowback from the right.

According to the National Review by conservative writer Micheal Barone:

“There is something discordant about mandatory five-year terms for marijuana possession when voters in Colorado and Washington State have legalized the drug, and medical-marijuana laws elsewhere have made it easily available.

Moral issues are raised as well. We have a duty to prevent the rapes that too often occur in prisons and a duty to care about the plight of prisoners’ children.

Americans still favor capital punishment, with 63 percent support in 2012, but several states have abolished it recently and executions in most states are rare. Perhaps more important, many states, Republican as well as Democratic, are scaling back mandatory minimum sentences and releasing prisoners earlier than previously. Read Full Article

The special election to fill Senator Frank Lautenberg’s seat is on October 16, 2013. We will find out soon enough if Cory Booker can turn his political superpowers (for which he has been both mocked and praised) on the world’s biggest jailer.

Photo Courtesy of Triplets in Tribeca

Meredith McMonigle is a macro social work intern with the Southern Coalition of Social Justice in Durham, NC. SCSJ partners with communities of color and economically disadvantaged communities in the south to defend and advance their political, social and economic rights through the combination of legal advocacy, research, organizing and communications.