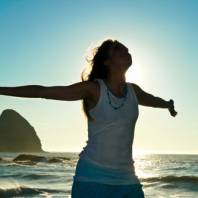 When I ask stressed and anxious psychotherapy clients if they’ve tried any breathing techniques, I often get the reply, “I’m just too stressed out; it doesn’t work for me.”  Recently, I saw a new client and asked him if he’s attempted to slow down his breathing when he gets agitated. He said, “My mind goes 90 miles an hour, and I just can’t stop it.”

If clients say they can’t meditate, I ask them what they think about often during the day. Often it is thoughts such as, “I’ll never be good at anything.”  I point out that they can meditate!  This is the meditation they are doing as they are repeating something over and over again to themselves. However, it is a discouraging message and one that they may have heard from someone in their past.  A mantra is something that we repeat, and it is good to observe what is repeated mentally each day. This itself alone is a very useful practice because someone can see which thoughts dominate each day and then be able to replace them with something that is elevating and gives a new direction. Instead of trying long, slow deep breathing to help with the stress of racing thoughts, I’ve found that doing a segmented breath can be very helpful. This technique enables someone to concentrate on meditating, instead of the thought pattern, and it also increases the oxygen to the body.  In this breathing exercise, sit comfortably on a chair or a cushion. Place the palms up and the left hand on top of the right in your lap. Take four breaths in as you sniff four times. Exhale out with four breaths. Repeat this for 3 minutes.  I tell clients they can concentrate on the numbers 1, 2, 3, 4 and repeat. One can also mentally repeat the phrase, “Let Go” using one word per breath. The inhalation has you think it silently two times, and each exhalation also has you repeat it two times.

Some clients actually prefer to use sounds from another language though I always give people a choice if they prefer English. For those comfortable with that, the sounds that can be used are Sa Ta Na Ma (repeating each one mentally with one inhalation or exhalation). These represent the cycle of life. One of my clients told me she actually prefers using Sanskrit or another language because it helps her to vacate her usual thoughts as she has no associations with them.

Not only will this increase oxygen (which helps combat depression), it also will helps to balance the sympathetic and parasympathetic nervous systems. We often are on fight or flight response and this means that it is easy to be on adrenaline. The parasympathetic nervous system is often suppressed. This quiets the mind as it’s hard to focus on either habitual thoughts or external things during this breath. The lungs expand. Many people have observed how depression and anxiety clients often are shallow breathers.

I worked with someone a few years ago who was very uncomfortable socially and would freeze up around others. She was quite self-conscious and could not relax when trying to interact with others at school or in stores. Rita noticed practicing breathing quieted her mind. She was able to observe how much she is consumed by others’ opinions of her. Rita found that through practice she was less worried. When she ran into someone at Publix who she had always put on a pedestal, a natural conversation occurred. Additional benefits for Rita included she gaining insight into her passive and overeating tendencies.

Jill often had her shoulders up in a defensive posture. She was guarded and anxious. Jill was able to identify some of the triggers that result in her inhibiting her breath and raising her shoulders. Shoulder shrugs work well as you inhale up and exhale down raising and lowering your shoulders. Feel that all the burdens and luggage are being dropped each time the shoulders are lowered. Breathe through the nose and consciously lift them and then drop them.  After doing this for a minute, roll the shoulders forward five times and then roll them backwards another five times.

Practicing the segmented breath, followed by the shoulder shrugs, is easy to introduce to clients to an approach that gives them tools to combat negative emotions.  Here are two case studies that have written about using the meditation, breathing and yoga technique:

Dee Cohen is a Licensed Clinical Social Worker in Florida and Certified Yoga Teacher. You can read more articles at her blog  Tools For Stress Relief as well as visit her inspirational daily quotes for inspiration page at Inspirational Quotes on Facebook. View all posts by Dee Cohen