byVilissa Thompson
in Disability, Elder Care
0
ADVERTISEMENT
Share on FacebookShare on TwitterShare on LinkedinShare on PinterestShare via EmailShare on Reddit

This month, we learned that former model and restaurateur B. Smith has been living with Alzheimer’s Disease.  Smith, dubbed the “black Martha Stewart” due to her career paths as a designer, author, and TV host, shared her story about remaining steadfast in fighting the disease, and having the support of her husband and business partner.

More than 5.2 million Americans live with Alzheimer’s, with over 200,000 being those 65 years and younger.  Of this population, 3.2 million are women and 1.8 million are men; women make up two-thirds of those living with the disease.  It is estimated that by 2050, the number of those with Alzheimer’s will triple from 5 million to 16 million.

Last year, almost 16 million American families and friends provided 17.7 billion hours of unpaid care to those with Alzheimer’s and other dementias.  This unpaid care has the value of $220.2 billion.

When it comes to medical care, Alzheimer’s is the most expensive condition in America.  With the projected tripling of those living with Alzheimer’s, this medical care expense strain will be astronomical. 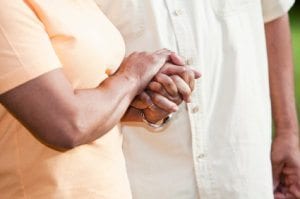 According to the Alzheimer’s Association, many Americans dismiss the early warning signs of Alzheimer’s, inaccurately believing that what they are experiencing are normal developments in the aging process.  This misunderstanding of the aging process versus Alzheimer’s is especially true for African Americans, who are two times more likely to develop late-onset Alzheimer’s disease, and other dementias, than whites.  Missing the beginning stages of Alzheimer’s greatly disadvantage African Americans, as we are less likely to receive a diagnosis for our condition, which correlates to delayed treatment and planning.

How Alzheimer’s Disease Affects My Family

During the Summer 2008, my beloved Grandmother was diagnosed with the early stages of Alzheimer’s at the age of 78.  She, as well as us, noticed her having difficulty with routine tasks after she had a mild heart attack two years prior.  We decided to tell her general practitioner about our concerns, and he suspected Alzheimer’s, and placed her on a medication regimen to slow down the progression of the disease.  It has now been six years since the diagnosis, and we battle this disease every day.  Grandmother’s memory may not be as lucid as it used to be, but she is firmly holding on to the independence she still has, despite the disease.  Seeing her remain steadfast through it all gives me the strength when it comes to caregiving.

Resources for Those Living with Alzheimer’s Disease, & Caregivers

There are programs and organizations established for those who are impacted by this disease.  In order to overcome the struggles both those living with Alzheimer’s and caregivers endure, you have to educate yourself about the disease, and the supports that exist to help you during this journey.

I Have Alzheimer’s Disease:  http://www.alz.org/i-have-alz/i-have-alzheimers-dementia.asp

2014 The Longest Day, a day observed around the world to honor the strength, passion, and endurance of those living with Alzheimer’s.  The goal is to raise funds and awareness to propel the mission of the Alzheimer’s Association.  The Longest Day is held on June 21, 2014, which is the Summer Solstice (the longest day in the year, and the first day of the summer season).

Other resources for caregivers of those with Alzheimer’s

Education, medical research, awareness, community support, and acceptance are dire so that we can one day live in a world where Alzheimer’s does not rob us of those we love, and their memory.  I love my Grandmother, and Alzheimer’s will never be able to break the bond we have, no matter what lies ahead for us.

(Featured headline image:  Courtesy of A Place for Mom.)

Education and Training Versus Experiential Learning