bySWHELPER
in Criminal Justice, News
0
ADVERTISEMENT
Share on FacebookShare on TwitterShare on Linkedin

On yesterday evening, after teaching and a special prayer meeting for our brothers and sisters in Charleston, SC, a white male approached our church with a weapon we thought was a machete. He began yelling obscenities and racial epithets while threatening to kill all the niggers at the church. 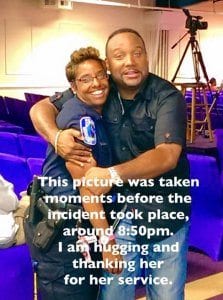 Upon alert, we locked down the church to keep the assailant outside and to keep our parishioners safe. At this point, he began banging on the doors and windows, continuing to threaten myself, other parishioners and all of the “niggers” present.

We are fortunate to employ off-duty officers from the City of Richmond Police Department each time we have a service. One of our officers then approached the suspect with her weapon drawn and asked him to drop the weapon. These warnings were ignored until backup arrived at which that point, the suspect threw his weapon into a nearby bush.

The suspect was apprehended and taken to a mental facility to be further evaluated. Unfortunately, it appears that threatening to kill people with a weapon and using racial epithets is not a crime in the state of Virginia so the assailant will not be charged with a crime, instead released back into the general public after his 72 hour evaluation.

We thank you all for your prayers and well wishes during this time. Continue to pray for us as we try to get change enacted in the state of Virginia. Threats to lives should be taken seriously, regardless of your mental state. One life that may have been lost in our church family due to a sane or insane person, would have been one life too many.

This is a photo of me and one of our Richmond Police Department officers that has been working at our church for more than 9 years. I am thankful for her many years of service at our church and for other instances in which she is protecting our lives.

Medina Pullings and I and the United Nations International Church Fellowship family of Va are very thankful to God for his divine protection.

What is Identity Anyway?