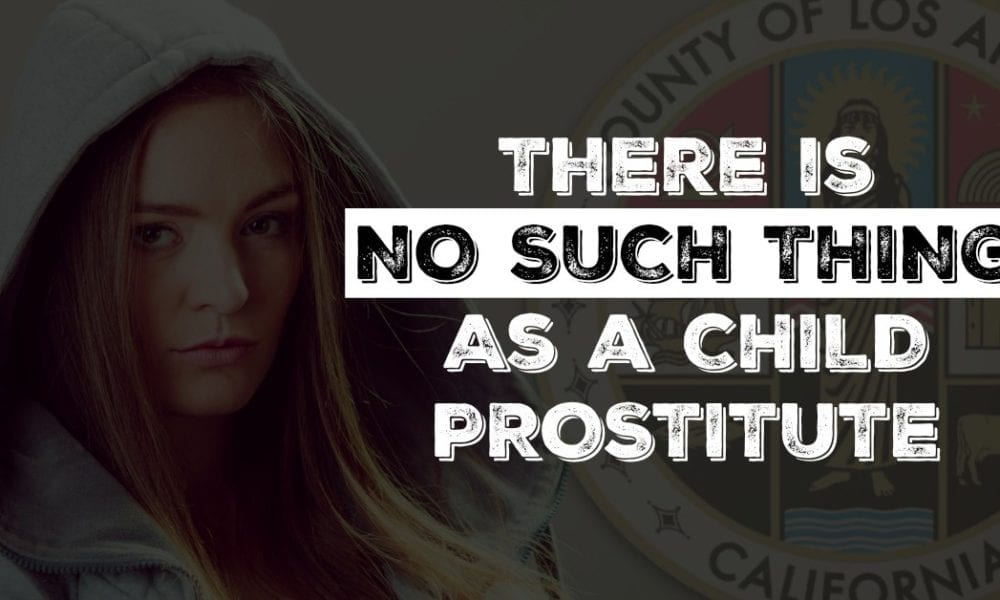 Forty years ago, it wasn’t unusual to find Lois Lee, Ph.D., J.D. wandering the streets and alleys of Los Angeles at 3 a.m.; she even did so while pregnant with her son.

Dr. Lee was looking for victims of sex trafficking and those who exploited them.

Walking miles along Sunset, Santa Monica and Hollywood Boulevards, the then-24-year-old would hand out business cards with her hotline number, encouraging victims to call and letting them know what kind of help they’d find.

“These are girls, boys and transgender children that would fall between the cracks of the system,” remembers Lee. “They had nowhere to go — no one was providing a bed or a school or offering to take care of these kids.”

So, she created that place.

From 1979 to 1981, Lee housed more than 250 sex trafficking victims in her own home, all while building the Children of the Night outreach program; the privately funded nonprofit organization would become unlike any other in existence at the time, or even today, rescuing children from child prostitution and providing housing, education and treatment.

But perhaps most important, Lee gave them hope.

Lee was raised in Los Angeles, the eldest child in a family of three girls. It was a childhood she describes as healthy, safe and sheltered.

So when, as a graduate student at California State University, Dominguez Hills, her faculty mentor Jeanne Curran, PhD., then a professor of sociology, introduced her to the underworld of sex trafficking, it was a wake-up call.

“I wanted to make everything better because I just couldn’t imagine someone living in these types of conditions,” explains Lee, who graduated from CSU Dominguez Hills with a bachelor’s degree in behavioral science in 1973 and a master’s in sociology in 1977.

It was at CSUDH that she developed the skills she’d later use to address child sex trafficking. Lee also taught courses at the campus’s Social Systems Research Center, then led by Dr. Curran. The center has since been renamed the Urban Community Research Center.

“Jeanne became a mentor for me, both on- and off-campus. She influenced my life and academic choices so much,” says Lee, a first-generation college student.

“She and CSU Dominguez Hills empowered me.”

Late one night in 1977, Lee received a call from a woman who operated an escort service. A 17-year-old she worked with had not returned and she was unable to contact her.

Afraid, she had called Lee for guidance. Lee went to the police, who dismissed the call and refused to help. The next morning, the girl’s body was found; she had become one of the Hillside Stranglers’victims.

Frustrated by the lack of resources that were available to these girls, Lee appeared on an L.A. news broadcast, giving out her personal phone number and encouraging prostitutes with knowledge of the case to reach out to her directly. She promised confidentiality.

“I coordinated everything just as I had learned from Jeanne at CSU Dominguez Hills,” Lee recalls. “And that was really the beginning of my work.”

Lee would go on to play a critical role in the Hillside Strangler trial, testifying in the case and coordinating witnesses for the prosecution.

At just 27, Lee garnered attention when she sued the Los Angeles Police Department for prosecuting underage prostitutes while letting their customers go free.

She won the case and has gone on to file a number of other lawsuits.

“I taught vice detectives nationwide that there were children prostituting and they needed to be treated differently,” says the President’s Volunteer Action Award recipient. She strongly advocated – and still does – to have the children referred to and treated as victims, not criminals.

Education: The Key to Success

To date, Children of the Night’s president and founder is credited with rescuing more than 10,000 children from prostitution in the U.S.

The organization’s shelter, located in Van Nuys, California, offers no-cost housing for as many as 12 children ages 11 to 17. They attend classes at the on-site school, receive individualized treatment, and participate in fun outings. A nationwide toll-free hotline is also staffed 24/7.

Lee sees education as the most fundamental of the services they offer, and attendance is mandatory for all residents.

“What’s really important about the development of any society is to educate the people,” she explains. “Through education, I was able to learn about the world. Education empowers.”

While children are offered treatment to manage trauma, their past experiences are not the focus, Lee stresses. “I don’t feel sorry for the children with whom I work,” she says. “[That] incapacitates their ability to become strong and independent. I want the world for my kids. I have very high expectations of them.”

Which is not to say she isn’t deeply empathetic to what they’ve faced.

“There is no way that I can make what happened to them go away, but I can … put distance between their old lifestyle and their life now.”

Today, Lee is regarded as one of the world’s leading experts in rescuing child sex trafficking victims, raising awareness on a topic that previously wasn’t talked about. In 1981, the General Accounting Office estimated there were 600,000 children under the age of 16 working as prostitutes in the United States. Today, that number is estimated to be 100,000.

In January 2017, Children of the Night announced a new global initiative to rescue 10,000 more children worldwide from sex trafficking.

Lee is also passionate about giving back to the campus that helped turn her dream into an advocacy mission that has no doubt saved thousands of lives.

“So much of what I have done and have been able to do in my life is because of my time at CSU Dominguez Hills,” Lee says. “The faculty raised me and nourished me. They liked to take risks and they challenged traditional thinking processes. “Dominguez Hills taught me how to break down barriers.”