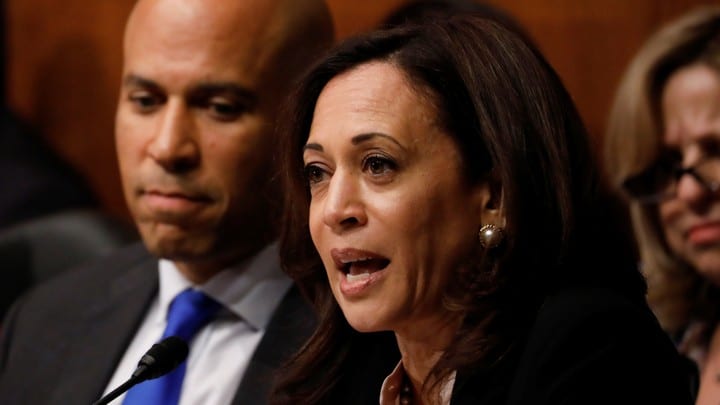 Senator Kamala Harris has been at the top of her game over the last week. Leading the wave, Sen. Harris has been first, clear, compelling and unrelenting in condemning Donald Trump, Brett Kavanaugh, William Barr, Mike Pompeo, and Rudy Giuliani. She has communicated her message versatilely, eloquently, and effectively. Speaking and tweeting with conviction, concision, discipline, and allure. One strong example:

“Trump’s tweets about the whistleblower represent clear intent to harass, intimidate, or silence their voice. His blatant threats put people at risk—and our democracy in danger. His account must be suspended.”

Trump's tweets about the whistleblower represent a clear intent to harass, intimidate, or silence their voice. His blatant threats put people at risk — and our democracy in danger. His account must be suspended.

Another hard gem: “It’s been one year since the horrific, premeditated murder of Washington Post journalist Jamal Khashoggi by Saudi Arabia. And Trump has yet to hold Saudi officials accountable. Unacceptable – America must make it clear that violence toward critics and the press won’t be tolerated.”

Sen. Harris has praised distinguished Congresspersons Maxine Waters and Al Green for long opposing the grievous mistake of giving Donald Trump a millimeter. Sen. Harris has publicly given Republican Senator Chuck Grassley credit for supporting and defending the whistleblower. She did not hesitate to sincerely wish Senator Bernie Sanders a speedy recovery, commending also Sanders’ political toughness. She has sagaciously intensified the force of her presence in Iowa. She has expanded colorfully in Nevada and New Hampshire. She sustains a hard look at South Carolina.

In her latest interviews, Sen. Harris has handled delicate matters with open, acute sensitivity as she has overpowered shade with the clarity and detail of her answers. It is as if Sen. Harris has chosen to step forward, and, standing straight and tall, say: I want you to hit me with your best shot. Please. She even wrote a letter to Jack Dorsey requesting that he consider suspending Donald Trump’s Twitter account. I clapped before chuckling. Then clapped some more. Perhaps Sen. Harris’ finest achievement of the last week, however, has been her comforting and entertaining demonstration of first-rate prosecutorial prowess.

I mean, that video of her filleting William Barr warrants a parental advisory label – not for explicit content, but for the startling and just ferocity with which she slices Barr open like a cardboard box. Her interrogation of him is both ruthless and revealing. Yet what I admire most about her prosecutorial prowess is the brilliance it magnifies. With each question posed, we see that Sen. Harris understands precisely how to press, entrap, expose, and defeat.

This week Senator Harris graces the cover of Time magazine, propounding her powerful case against four more years of Donald Trump. It is little wonder that critics are crawling out of the woodwork. Some should be stiff-armed. Others of these critics, such as Wall Street Journal columnist Peggy Noonan prod vaguely with slights and cavils and quibbles about Sen. Harris’ leadership that amount in the best case to indiscernible conclusions. I, for one, believe the Trump administration needs urgently to be subjected to the harsh punishment of a prosecutorial atmosphere. I also think that calling Donald Trump a screwball makes light of his cerebral defects and his vile bigotry.

Other critics, like Dr. Jason Johnson at The Root, appear somewhat less substantive and consistent and tend to carp and grumble in the form of snarky, backhanded compliments about the efficacy with which Senator Harris has campaigned. More thoughtful critics – David Axelrod, for example – have put forth sensible observations that might be more useful if they were offered in the context of comparison. Put differently, what specific alternatives should Harris’ consider and why? I would further challenge Mr. Axelrod to specify who, if anyone, in the Democratic field is delivering well in those areas.

Finally, we encounter seemingly naive detractors hardly worth validating. Those who ask Senator Harris tougher questions than they ask Senator Warren, on purpose, before dodging public calls for an apology from the press. Lyz Lens deserves the feedback she has received. Former UN Ambassador Nikki Haley should be less embarrassing.

The rest I spare, for now.

As we approach the fourth Democratic debate, look for Senator Harris to continue shining. We – me and all of my family – love to see it.

Zachary R. Wood is the author of Uncensored: My Life and Uncomfortable Conversations at the Intersection of Black and White America.