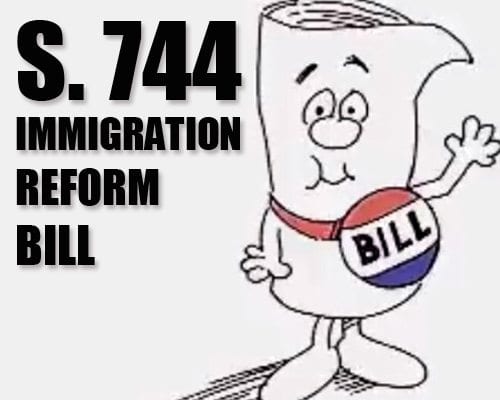 Within days of each other, The Defense of Marriage Act (DOMA) was repealed, the Filibuster in Texas stopped an anti-abortion bill, and the Supreme Court refused to rule on Prop 8. The Voting Rights Act of 1965 endured a devastating blow with the Supreme Court striking down section 4 requiring states with historical discrimination practices to seek pre-clearance before modifying voting laws, and Senate Bill (S. 744) addressing immigration passed the Senate with a vote 68 to 32.

What does S. 744 : The Immigration Bill Address:

Border Security: DHS (Department of Homeland Security) will tighten up on border security and it provides a budget of 6.5 Billion to increase resources and infrastructure with more tax dollars spent on basic border surveillance.

Immigrant Visas: RPI (Registered Provisional Immigrant) is the status that will be given to immigrants who meet specific legal standards as addressed in S. 744.  The ability to apply for family members who are in the country without updated documentation or illegal status will be granted a path to citizenship.  This is a costly matter and lower income families are less likely to meet the minimum standards.

Visa Updates: Changes regarding different documents including V(visiting )visas, U (undocumented) visas, RPI (Registered Provisional Immigrant) visas, and LPR (Legal Permanent Resident) visas, and the qualifications an individual must face along their journey toward citizenship.

The Dreamers:  Dreamers are childhood arrivals who have advocated for their access to education, driver’s licensing, and to basic human rights. They are included in this bill and will be allowed a fast track to citizenship.

Access to Benefits: Dependent upon the type of visa received, governmental aid provided to many at-risk populations in programs such as Medicaid, Temporary Aid to Needy Families (TANF), and Social Security may or may not be provided. For example, Registered Provisional Immigrants (RPI) are ineligible. However, RPI status immigrants will be allowed to operate in the private market system for medical insurance benefits.

Employer Enforcement: E-Verify and work authorization guidelines. This section of  S. 744 includes worker protections against exploitation. This section gives rights to temporary farm workers (those who hold H-2A visas) who hold temporary agricultural visas.  In the past, this population has been exploited by large farms that do not want to inform their workers of the rights they have as employees in the United States.

The path to citizenship in some cases will take up to 13 years to accomplish. This comes at a time where Latino voices and Latino storytellers have been able to have a stronger presence in the immigration dialogue. The passage of S. 744 in the Senate was a step toward equality and justice, but it still needs House support in order to become law. The Republican majority House may prevent S. 744 from being voted on without a majority of House member’s consent. According to Speaker John Boehner, House Republicans have their own immigration bill.